Well we woke up early because today was the day for the GIGUNDA Celtics parade !!! We were supposed to go to Ascot with Blue but we told her we absolutely could not because this was very very important.....THE CELTICS CHAMPIONSHIP PARADE!!! Now the Celtics are a very big deal here..... They have now won 17 championships....but we haven't won a championship for 22 years!! So in a town devoted to its basketball team and the game of basketball THIS WAS A BIG DEAL!!!!! So....we thought we might like to get in a swim early before the festivities started but we didn't want to get our hair wet.I remembered these shower caps that Scruffy sent Archie( because once Scruffy posted a pic of himself in a hat and Archie thought it was a shower cap and was laughing for days......I mean rolling on the floor snorting....) 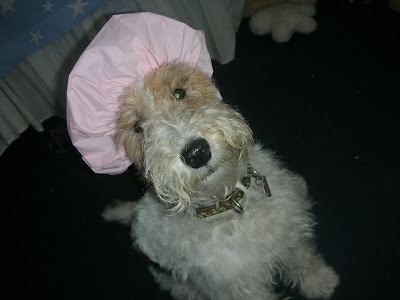 Archie is muttering something under his breathe about giant pay back and now Scruffy will never let him live this down.....But we were too excited for a swim and just went straight to the parade.... 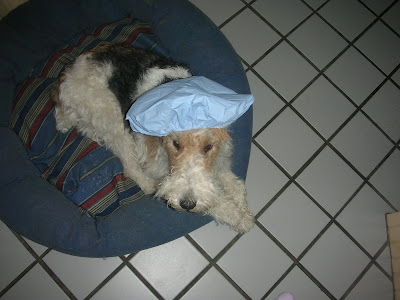 Now we have these Duck Boats here(they are originally from World War 2 and they are amphibious!! They are REALLY cool! They take you on a tour around Boston and you see all the sites and then they go into the Charles River and become boats and you get to take a lovely boat ride down the river!!!! Isn't that neat!! Well it has become a tradition here in Boston when one of our sports teams win they have what they call a rolling rally parade and the winning team goes on these Duck Boats around Boston and all of us fans stand by the road and go crazy taking pictures and acting like goofballs( not hard at all for my brother) So I got on the boat with Paul Pierce the team captain. It was VERY sunny so I thought I should cover my head(with the bananarama that Faya sent me) Then I switched over to my Celtics cap(didn't want to get hat head) onto the boat with the confetti maker!!!! 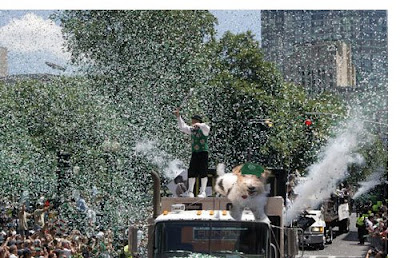 Of course Archie started out on the first Duck Boat to make sure all was O.K. 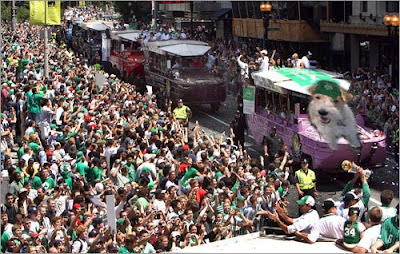 This is Ray Allen...PL2 LOVES him,and thinks he has a lot of class!!! 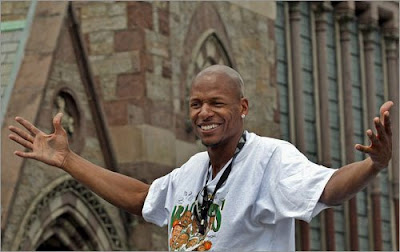 Well of course they all CLAMORED for Archie to get on the Duck Boat with Kevin Garnett and Sam Cassel AND THE TROPHY!!!(Archie said he got to kiss it. I bet he left nose marks all over it) 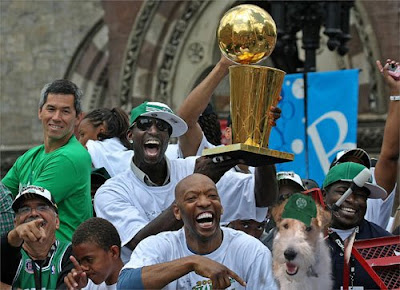 Here is a replica of the banner that will hang in the Boston Garden with the other 16 banners and all of the numbers of the greatest players ever...We will have to wait until the first game of next season to see the banner lifted to the top of the Garden. Archie is already helping to plan that event and they have asked him to help design the rings that all the players will get. He is thinking of something with a little stuffie on it,or maybe a bone. We'll see if they like this idea 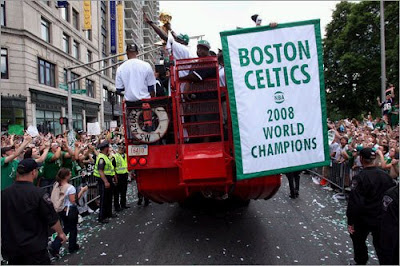 Even Sullivan got into the whole party atmosphere!!!!!!(notice how he is a little slanted?? He found out how to order drinks over the internet and have them delivered to the house) 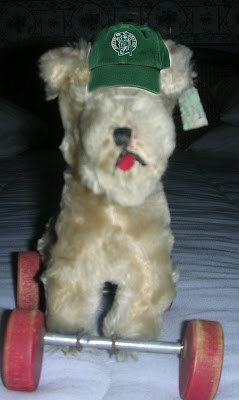 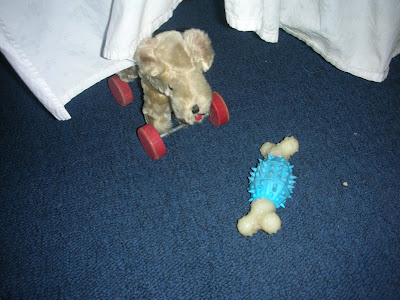 Posted by Agatha and Archie at 7:46 PM

Oh, you two look sooo funny with those shower caps on! Wow, look at all of those hoomans. They are sooo happy!

Those Duck Boats look kinda cool!!! But, I don't see any BEAk?

Although I missed you heaps yesterday @ Ascot - quite understand, one has to have ones priorities right!

Glad to see you both go in on the action & had a great time celebrating your teams win.

Ah the shower cap photo is so cute...

I saw a little of this on T.V and swear that I heard the crowd cheering "A and A!! A and A" over and over. Looks like you had a terrierific time...I hope Archie didn't partake in the stogies with Garnett!!

Oh both of you are sooooooooooo cute in that cap and you pals sure got a BIG parade there. Congrat!!

that was a fantastic parade. you totally deserved it and the Celtics were okay too. we like Ray Allen. he used to be in Seattle. (no comment about the seattle team)

Major major congratulations!!! We know how it feels to be part of a historic celebration. And how cool that you got to participate!!

Do those Celtics know how lucky they are to have A+A join them in their festivities?

We met up with Toffee and Riley's mom and dad lately (It was a very nice get-together) and thought we should come by and say 'woof' to you guys who are closed to them.

We were saying awwwwwwwwwwwww when we saw you in a "shower hat"! :) Both of you look so cute!

We would love to link your blog to ours so you're only click away. Hope it's ok with you.

Have a great weekend!

Hey pals, you look smashing in your shower hats! You never know, they might become all the rage! Looks like you had a pawsome time celebrating... J x

Go Celtics! Glad you participated in the parade. It looked like great fun and of course they couldn't have done it without your help. I'm sure that the Celtics would love to have Championship rings with stuffies on them.

OMG, how exciting ever to get to ride with the Celtics in their duck boats!
We love that picture of you in your shower caps! Mom can't stop laughing!

I loved your shower cap pictures. Only Archie could make it look like a fashion accessory. The parade looked like sooooo much fun. I'm glad that the two of you got to be in the thick of it all.

that parade looks fabulous, I was wondering how long it had been since they had a championship! Soooo, how DO you order drinks on the internet?

Wow you guys are really into your basketball team. The parade looks awesome, what a turn out!!!
Sydney Kings basketball team just went broke and are no more...c'est la vie.
Anyway, Lucy's leg is better thanks and I can guarantee (even though I have no proof) that she shreaded the doona.

Hi, Agatha and Archie!
You two look so cute with your shower caps!
Glad you had a great time celebrating with the Celtics. Sure it was a nice parade.
The rings with stuffies or bones sound interesting!
Kisses and hugs
Lorenza

I find it such a problem when my hair gets wet too. All those curls... but you two seem to have all the answers.Pink and blue shower caps...must get one or maybe a bananarama.

I's glad the duck boats won and that you had a ride on those Celtics hick, hip, hooray . . gosh Sullivan pours such generous measures . . .

And boo hoo, happy trails to Curt Schilling. We once went to watch the Sox drive their cars into the park during the afternoon before a game. Curt has a humongous truck—a whopping F350—that's even too big for the parking lot!

What an exciting day...
We just had to tell you about how they have Duck Boats in Wisconsin too. With all the flooding they had last week they were using those to rescue stranded people from there homes. The news said the drivers were honored to be called up for the job..
Funny Dad had to go right out and see if he could possible get one of those. Of course they were really high priced so we got no Duck...

Archie just continues to surprise me. He is quite the guy!

Babystan looks at the picture...

At this point both terriers are on floor holdin' stomachs and farting so badly the paint is startin' to peel...

At this point both dogs wet themselves....

Oh Agatha...you look soooooo 'dorable in that shower cap...and what a wise idea for you and Archie to wear them, so you fur stayed all nice for the parade!!!!!

Um, Sullivan seems to be fittin' in VERY nicely to your household! Orderin' drinks on the internet? WOW! I hope Seymour is willin' to pay for all of these charges!

I cannot for the life of me figure out what is wrong with the boyz and Mumsie...they all seem to have been incontinent for some reason. Hmm...probably cuz the boyz are only half housebroken, and Mumsie might need that bladder sling surgery. Hmm..seems like she was on the puter lookin' at ur bloggie before her accident....better get her started on those "bagel" exercises that they prescribe for such problems...50-100 bagels per/day...and 30 at all the stoplights...isn't that right?? My GYN rotation was a little confusing.

OH, AGATHA...I need ya for a special nursing case...and Asta and Koobie too...Stuffie Stan had a horrible accident in Hilton Head...I have to run and post 'bout it now....Come and take a shift if you can!!!

Wow! Those Celtics would have not won without all your help!!! But we were routing for them here.
our silly servant had a big chuckle at the shower caps photos! she used to wear them at work...

wags from the whippets

You're such good fans, no wonder those Celtics want you in their big parade!
- Charlie

Hey A&A,
What a marvelous parade! Mama told us those duck boat things are very fun. You two look so cute wearing your little shower caps. And you were so lucky to get to ride with the Celtics. Glad you had such a great time.
Luv & Wirey Hugs!
Butchy & Snickers

Agatha and Archie! Hope you had a good weekend! Are you still celebrating? If so we want to join you guys!

Thank you for coming by our blog and leaving kind words. :)

Archie, I came by to thank you for asking me to start a band with you. You are the first to appreciate my musical talents!

Woohoo! Go Celtics! Are they gonna recruit you two next year for their mascot? I think they totally should. Though, I don't think you should wear your shower caps to the game...just a thought! Hehehehe, you guys make me giggle all the time!

You guys are hilarious!!
Loved the shower caps !!!
Seriously the humans look so happy!
Frasier

How amazing that you didn't get stomped on you paws at the parade.
Sniifs 'n' Slobber
George

Guess what
I got a surprise package from Faya...now I have a bandanna with cows on it...its glorious for sure
Hope you guys are having lots of fun and playtime
Deetz

Hey you two so good to see you both again :) i've missed coming to your blog. So good to be back blogging again. How good is that you's there experiencing all the celebrations... thats so cool. Love the pictures.