Well,Archie woke up with an ENORMOUS round area on the side of his back that was all red and the hair was gone(PL2 here, it wasn't ENORMOUS but big enough to be worrisome)PL1+2 had noticed a little area that was missing some hair but thought that it was from their grooming techniques( Show groomers they are not) and now it was big and red So they took him to the Holistic Vet today because they thought their other Vet(yep we have 2,one holistic and one not, don't ask)would want to try cortisone cream and they wanted to hold off on that if possible.So I went for moral support(unlike my dear brother WHO DID NOT COME when I had to go with my Pee issues which are all cleared up now thank you)Well she thought that Arch may have gotten bitten by something and now was having a reaction .Man this kid has major issues with bugs. Once he had fleas and was allergic to them!!( I didn't get one flea)Anyway so he has to have this stuff put on it and take this other stuff by mouth and PL2 felt wicked sorry for him because he is the wussier of both of us .And of course our pals at The Pet Cabaret had the stuff that we needed to put on him.
(Lisa and Lisa from the Pet Cabaret also told us that they are going to soon have a web site where you can ORDER STUFF ON LINE!! How cool! So all you guys can get stuff from there too!!!!) When PL1 heard that PL2 was going there he said,oh boy this ought to be good.......You always spend tons there(WELL WHAT DOES HE THINK?????)And then he showed PL2 the oil bill we got today and said that was it, the heat was going off and then he was mumbling about the price of oil and something about George Bush and a lot of swears that we can't repeat....So,,,, Arch and I decided that we would have to wear our scarves INDOORS. 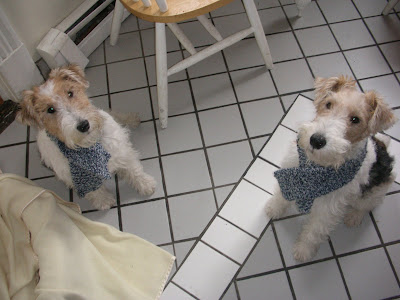 We won these scarves as a prize for 2cd place in a photo contest from the WFT email list for this picture........entitled 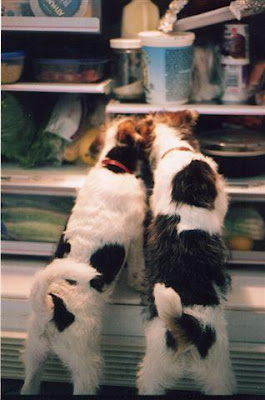 Anyway here's the loot( I went without Arch because he was really tired from going to the Vet so I chose all this stuff.........(and the girls had ALOT of new stuff so PL2 WENT NUTS!!!!!!!
One funny thing about Holistic Vets.Sometimes you can't understand really what they are talking about and the one Arch saw was covering for our regular Vet. She examined his head and said she thought(or this is what PL1+2 heard)that his head was weak ...(HAH!! You didn't need to go to the Vet to know that!!!!) First PL2 thought she said his head was melting(his brain more likely) but she KNEW it couldn't of have been that) so she bought LOTS of chew things(that I picked) to strengthen his head( it''ll take more than this but...)

These chewies are made from fish and are good for joints(if you have arthritis) and good for your breath( what fish breath is good???) 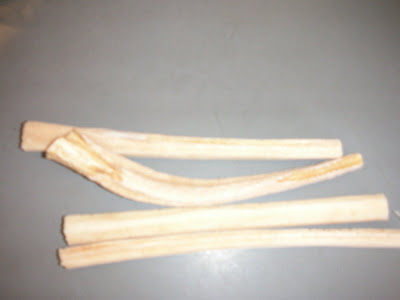 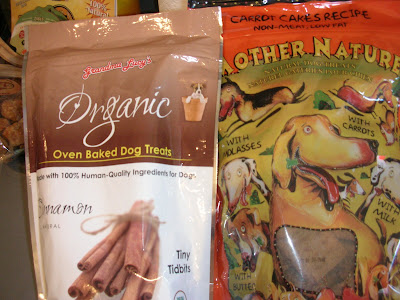 Another chewie thing made from carrots and parsley..... 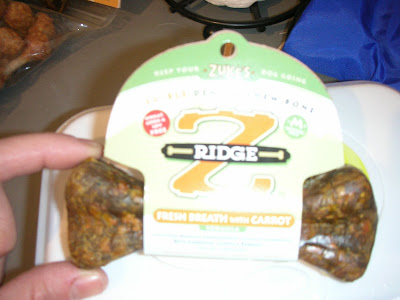 A chewie toy that smells minty and is good for your breathe( wait a minute...) 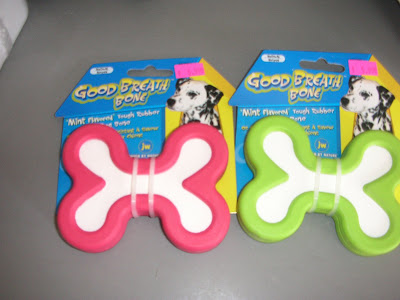 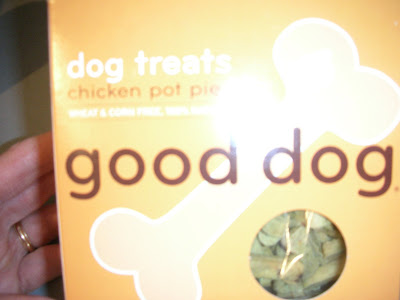 Of course our favorite,sweet potato chews........ 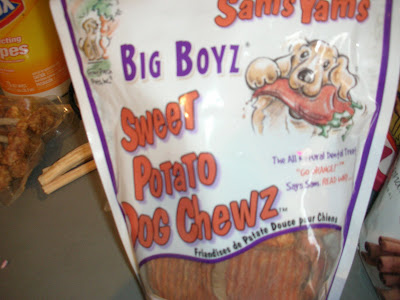 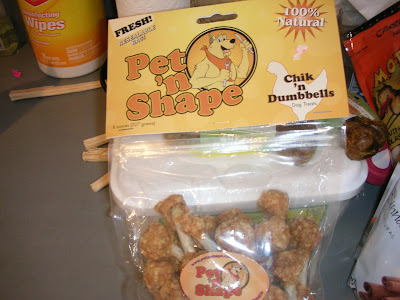 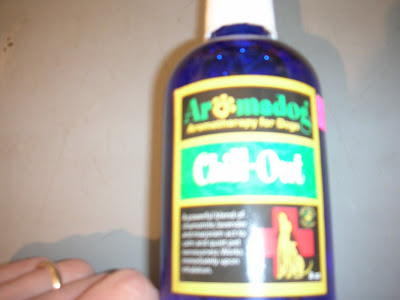 Well I do have to say she did spend a bit and now she is mumbling about flipping cold she is and she can't feel her fingers because the heat is down and now she will have to work a million hours a week because oil is so expensive and she is saying a lot of swears too......
Yesterday was the last night of Chanukah........Here are all our candles(PL2 just said this is how we are going to have to heat the house now.....) 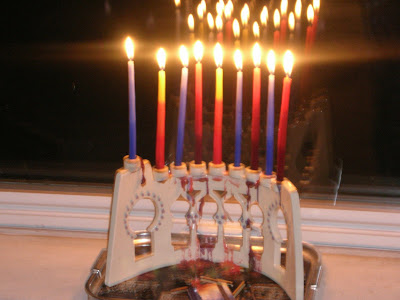 Here are our presents...A cookbook on how to make us treats(because a girl really can never have too many treats..Check out the dogs on the cover) 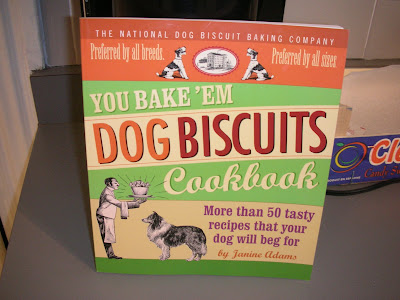 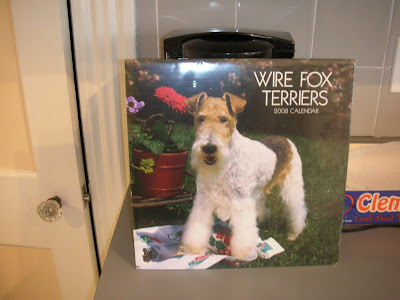 This is a toy PL2 noticed all the kids at the show had in the ring so she got us each one..... 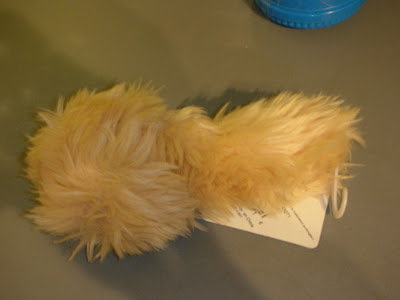 This is( I mean was) a toy that Archie said PL2 must have bought defective..tee hee 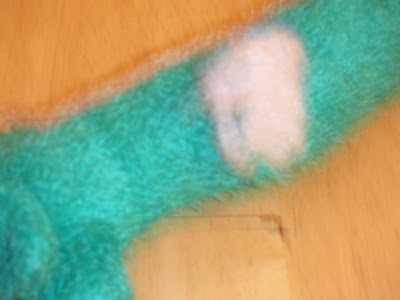 Happy last of Hanuka.looks like it was weally nice at youw house and you got gweat stuff..I love the wiwes on the coobook, it must be good if wiwes appwove of it!
Archie's head is melting??????maybe you've had the heat way too high, that's why youw bill was so high..you can some live at my house, we have electwic heat and so faw we can still pay(can't pay ouw went though, so I think that's wowse,hehe)
I love the pictoowe of you two in youw scawves! and when you'we in the fwidge..did you dfind the pwovolone???If you'we coming, bwing some OK?
smoochie kisses
Asta

Wow! Look at all of that tasty stuff you got! This should keep you busy for awhile!
Mom and dad almost choaked when our oil bill came yesterday! They were wondering how in heaven's name people are going to be able to afford to stay warm this winter?! I guess we'll be wearing our scarves soon too!

Hi, Agatha and Archie
How is that Archie's head is melting? Maybe that is why he does strange things sometimes!
Yes,those pictures of you two with the scarves and in the fridge are great!
You two got lots of healthy treats and yes... a deffective toy!
You and all your family are invited to come here. 85 degrees! No high bills to pay!

Hey Agatha..tell Archie muzzer is bugallergic too! She gets big red welts, and uses Tea Tree Oil. She carries this little thing with her that looks like a roll on perfume bottle, and if she even sees a but, she starts wavin it around.

But, we hope Arch doesn't go all weird like muzzer. Maybe her head is meltin too?

What a shopping spree!!! Agatha you have such GREAT taste!!! I sure hope Archie feels better...give him a lick from me...I'm sure it will help!!!

Holy DOG!!! Look at all those delicious treats, yummmm... I;m dribbling here! I have that bouncy fluffy toy too but now, it's not soo fluffy anymore & the squeaker is dead.

wow that is like treat heaven. treat overload. WOW. I feel bad about the vet visit tho, I hope mr weak head gets better soon!

Crikey Agatha, we hope Archie's head is ok and isn't going to melt. That would be really bad.
We have a lovely airedale calendar to give to our grandfolks. We've given them one every year for the last 6 years. They think it's funny.............?
We like your WFT calendar.

My, that is a mountain of treat! have chewing! And we hope Archie's head stops melting soon. has he turned into a snowman?!

Hey pals, poor Archie, I hope his head isn't still melting. I hope that when the Pet Cabaret get their online shop they do overseas orders! Their stuff looks so pawsome it's enough to make anydog's head melt! I've got a grey scarf a bit like yours. It did have a matching jumper but J1 managed to shrink it in the washing machine. It's now so small it would probably fit one of the those show dog WFTs! J x

"Archie, the snowdog...." OMD, we don't know what to comment on first.

Archie...GO OUTSIDE...ur head will NOT melt out there. Just no way with the weather ur supposed to get. (Mumsie wants to know if the vettie charged u a lot to tell u his head was melting...she said something like it's a priceless dx.)

We've seen that pic of u guys in the fridge...but we don't know where...creeeeepy...on line?? So Arch is bigger and has more spots???

Rent urselves out as portable space heaters to PL! & 2....have them pay in in more treats.

Happy happy Hannukah!!! If you use those candles to offset future heating bills, please don't burn down the house!!!!!

Time for our dingos...Mumsie sez she spends more on rawhide than she does on heat in this house!!!!

Scruffy PEE ESS Archie can you help out skating with Lacie? She can not stand up on her skates and needs many strong paws for support.

Hey, we hope Archie's head isn't really melting -- that sounds like not a good thing!!

We loved seeing your menorah on the last night of Chanukah -- Mom took a picture of ours too -- but then forgot to upload it. Maybe it's not too late.

We read about Carter. We're so sorry to hear he didn't make it -- but you were there to comfort him and that must have made his passing a bit easier for his family.

If your oil bills are too high and the house too cold -- remember you have friends in South Florida, where the temps inside and out are just right.

Waouw it is Christmas before Christmas !!!!!
Kisses, Faya

I got sidetracked by all the treats...so what did the vet say was the nasty thingie on ARchie's back?
Mom is still looking for the sweet potato treats in Philly...

Wow you got lots of cool stuff. We sure hope that the rash gets better soon.. Enjoy your yummies... Gus and Louie..

Archie and Agatha
I got no snow again...they keep lying to me..all I got was icy wain...no walks, no wun, no nothing..I'm sooo disappointed. Can you pleeez send me some snow?
smoochie kisses
Asta

Wow, nice gifts. Can we hire your Mom as a personal shopper? She knows what a dog likes!

Hope Archie gets his head on right and all healed up. Don't worry about the baldy places, mine always seem to grow back. Of course, mine are usually from Glynn playing rough (and we know YOU would never do that to Archie, huh?)

I'm catching up after losing internet coverage for the past several days. I hope Archie's head is not melting and that he's feeling loads better.

My girl's been to a couple of holey istic vets and she said that sometimes you need an interpreter. They should have someone on staff for that.

Your winning photo was hilarious! STella & I do the same thing, only Stella jumps up into the fridge if there's ever room on the lower shelf. She's definitely in the right family!

Glad your Chanukah was a good one!