Yep you read that right.he has not one BUT TWO dislocated kneecaps!! The Ortho Dr told PL2 that it is very common in WFT's(who knew???) But the funny thing is, it is worse on one side than the other and that isn't the side that hurts! He has strict bed rest for 2 weeks(2 WEEKS!) and has to be carried out to pee and can not play at all. ( CARRIED!!!!! And we live on the third floor!)Then after 2 weeks(and 5 more days of anti-inflammatory) he can go for a walk for 5 minutes to see how it goes........(5 MINUTES! 5 MINUTES!)and then each day we can add another 5 minutes.Oh boy, this is going to be a heck of a month.....When the Dr told PL2 he had to have restricted movement for about a month,she burst out laughing!!! He said he understood because he has a Jack Russell!!! He said it is something that can happen again and if it keeps happening he might have to have surgery(GASP) but we are kind of hoping it's a one time deal thing. PL2 also said something about going to a liquor store later.I am thankful I have the girls here to help, although I know they can not stay for a whole month (don't you just LOVE the pink snowmobile!that they came in!) But I was thinking of getting him a flat screen TV so he can watch TV and stuff 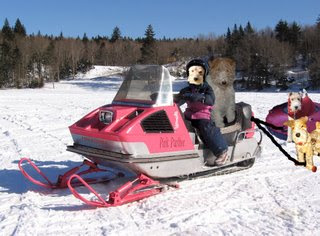 PL1 wants to know what gangster Archie made mad enough to dislocate his kneecaps..... 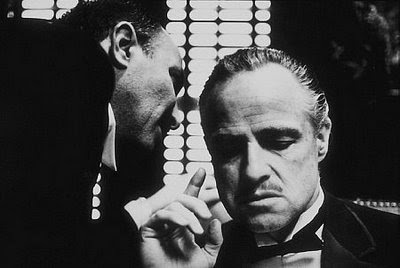 Archie is afraid to call Coach Bellichik and tell him that he is grounded for the rest of the season so I am going to haveto call him later..... That's our update!!! I have to go get more ice for the girls.......Agatha
Posted by Agatha and Archie at 3:45 PM

OMG Archie, what a nightmare. How on earth did that happen???? You poor thing. Sounds like everyone is going to have fun trying to keep you still. Good luck!!!
Rest up matie, let the girls take good care of you.

Arch and Agatha, So very happy to hear that you will be OK. I sure don't know how you can stay quiet for ONE MONTH. OMD. PL1, PL2, and AGatha, you are going to need lots of trips to the liquor store!!

Love the photo! The snowsuit is pretty groovy too.

I hear vodka is a great cure-all. I drank lots of it when Sophie had her surgery, and I'm doing just great!

Oh Archie....what's this...two screwed up kneecaps...tell me, did the second one happen before or after Lacie got there??? Hmm...What did u say to her that riled her red-haired Lakie temper?

And what's this...Agatha has to go and get more ice for the "girls"...now I am assuming that is for their frozen dogtinis...and not your blessed KNEES??? Archie...I think ya just need to come here for the month...and let those crazy women do their chica thing without you. We could have a huge marathon poker game...by the time we're done u'll be in no shape to remember that ya even have knees!

Let me know if you want Babystan to come up and fetch you...he could pull that innertube all the way back to Pgh. without problem. No way would he be caught in a PINK snowmobile.

Poor baby!! That's what we want to know, how did it happen?

And we can only imagine what it will be like carrying Archie up and down three flight.

Could you try pee pads or something like that?

Lots of love and courage to all!!! And a generous dose of pawtinis!!!

I know this is not kosher dog parenting, but share the booze with archie please

oh no archie how did you manage that one?! We hope he can stay calm for TWO WEEKS geeeeez. Good luck to your girls.

Hey Agatha if I can help... If Archie needs any therapy (besides the liquid kind you went out for) I am a Therapy Dog and I would be happy to volunteer my services!

Sam I Am whippet (glad you got a diagnosis)

OMD!!! Archie, I know is going to be hard but sure you need to be calm all those days! I want you to get better!
Don't worry, the girls will take good care of you. And if you need more help, let me know, ok?
Kisses and hugs
Lorenza

I didn't even know that we had kneecaps! Where exactly are our knees? (Maybe I should not be a nurse.)

Oh dear.. I hope your kneecaps get heal soon. But with the gals looking after you it shouldn't be a problem

How does one dislocate BOTH kneecaps? Bummer, man.

Soak up all the good nursing, and loving, and the healing goober smooches I'm sending your way! Milk it for all it's worth, bud.

Dislocated kneecaps??? OOOWWW!!! Gosh, it has got to hurt terribly! How did it happen in the 1st place? Is the doctor gonna do anything like put them back in place or do they just heal by itself?

Hey Archie, two dislocated kneecaps? That's gotta hurt! I hope you don't get too bored during your enforced rest period. At least you've got the dream team nurses to wait on you, hand and paw. J x

Wow! It's gonna be tough keeping you quiet for 2 whole weeks and your mom is going to develop popeye muscles from carrying you! Thank goodness you have the best nursing care, Archie!

Holy cow Archie! How the heck does a WFT stay on bedrest? I'm glad that you can just rest up and be attended to by your lovely nurses for a while!

I tried beer once. That was pretty tasty.

Bed rest for a WFT!!!
Heaven help you all.
But do hope it works as dislocated kneecaps sounds awful, & something you don't want to recur.

Hey Archie,
Mama read up on this & she learned alot. Be sure to get your rest like the vet said. We don't want you to go through surgery. We know it will be tough for you to be still, but just think of all the attention you'll be getting, hehehehehe. Mama said a drink sounds good today, tee hee, we're getting a snow storm later today.
Luv & Wirey Hugs!
Butchy & Snickers

We're just checking in to see how you feel today.

We know you're getting good care -- so stay calm, do some crossword puzzles amd Sudoku, and give us a shout when you're up to it!!!

u hope u will help to find out who's d real culprit...and then we will borrow the tank from tanner to fire at them!!

how awful for you all, especially poor Archie. I loved the pictures on your blog!!!!! They made me and Jeannie laugh out loud.

I am so sorry Archie is so pawly, I am sending Scottish Healing Vibes to his poor knee caps, and I will bite the Gangster who done it!!!!!!

oh and tell PL1 and PL2, that Jeannie says to set up a Red Wine Intravenous Drip for themselves, she finds that always helps in stressful situations!

Ouch Archie, that makes me cringe just thinking about it! I hope the top notch nursing care you have on hand is keeping you smiling.

Cassidy and Ihave come out in sympathy. I have itchy leg and have been nibbling so it's back to being a lampshade head. Cassidy tried to counter surf in the kitchen and slipped and pulled a muscle!

Oh my DOG Archie!!
Poor doggy! You'll be fine though, you'll see... But wow, limited movement, we don't know if we could deal with that, we are WAY too hyper...
We'll be praying fur a fast recovery!
Wags and licks,
Maya and Kena

OMD Archie....how on earth did you do dislocate 2 kneecaps?

Make sure you rest up and follow the doctors and nurses oders.

Sending you lots of positive airezen to make you feel better.

I hope the anti inflammatory has got a dose of Prozac in it!

COMPLETE BEDREST?! I will not be able to make it for more than 10mins!

Poor Archie, I hope it heels faster than what the doctor said.