A Sad week for us 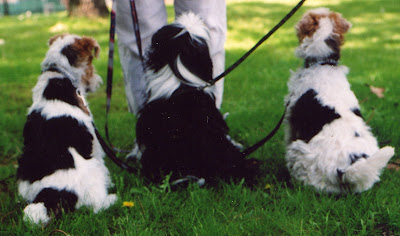 This is a picture of us and our "foster " mother Carter.Miss Carter passed away this week and we have been too sad to even talk about it. Some of our WFT friends know this story because PL2 shared it with them on their WFT email site and we would like to share it with all of you. We are going to let PL2 write because we are a little too sad to even type.

When A+A were wee little pups of 4 months PL1's Mother passed away and we needed to place them somewhere because we had alot of things to do,but we didn't know where to put 2, 4 month old puppies! Our dear friend who is a Holistic Vet(and owner of Carter) said she would be glad to take them in her house, but she wanted to see how Carter would do meeting them because she didn't take to many dogs.It was love at first sight and A+A became the puppies she never had but always wanted .The only dog we ever met who could control these two was Carter and we quickly named her their foster mother!! You can even see it in this picture!! Archie is looking ot her to see what he should be doing...Agatha is ,well being her independent little self!!)Our friend called us last week to let us know that Carter was doing very poorly.She had developed kidney failure and was becoming very ill very quickly.She asked if I could bring A+A over one more time for the 3 of them to say their goodybyes to each other.When I arrived at the house Carter was in the bedroom and A+A hadn't yet seen her. They were being their playful selves and investigating everything. When Carter was brought out to see them, in an instant they both stopped,and sat down one on each side of Carter and became very still and quite.Archie inched over to her and very very gently nuzzled her on each side of her head and then lay his head on her shoulder.I truly have never seen anything like this,because they truly knew and were saying their goodbyes.Miss Mary Ellen Carter lost her battle and she was only 6 years old and I learned a very valuable lesson. Dogs are the smartest most wonderfull things in the world,and I could only wish that humans were as wonderful as they are. They are my best friends and I love them to pieces( although they do have their nudnik moments!!) So go and give all your pups an extra big hug and smooch from me, we always think we have all the time in the world...... and raise a toast to Miss Mary Ellen Carter and to all of our most wonderful best friends...Diana AKA PL2
Posted by Agatha and Archie at 9:23 PM

Agatha and Archie
I am so vewy sad that Carter lost her battle and had to cwoss ovew the wainbow bwidge...I'm so glad you had a chance to say goodbye and tell hew taht you'll aways love hew and I'm suwe will someday see hew again. Untill then I'm suwe she would want you to be the happy pups shea ways loved.
Give hew Mom ouw sympathies too pleez .Rest in peace deew Carter
smoochie kisses
Asta

Hey A&A,
Thanks for telling the story again. We read it before, but it's nice to read it again. Animals really do know when another is sick or hurting. It was so nice that you two got to go visit her before she was gone. We're sure that Carter really loved being with you that day. Now she waits at a better place to see you again some day.
Luv & Wirey Hugs,
Butchy & Snickers

We are so sorry to hear of the loss of Carter. And at only six years old! How sad. How unfair. Our deepest sympathies to you and to Carter's family.

I, Koobie's mom, agree with you completely about dogs. They are remarkable. And far smarter than we could ever imagine.

I am very sorry to hear about the loss of your friend. Mom was crying be reading the story of Carter.... I give you all a lot of kisses, Faya & Véronique

So sorry to hear about Carter. You must really miss her alot... Poor thing. It's true that we can tell if another animal is sick. My hooman rescued a Malamute mix(she's still with us) on the street & she was already on the brink of death. When she arrived home, I was terrified of her becoz I can smell that she's sick. I'm never scared of other dogs who board with us but I didn't want to go close to her becoz I know she's not feeling well. Anyway, she's ok & healthy now & gonna be up for adoption soon. Will be thinking about you guys. Our sympathies to Carter's family.

Hi Agatha & Archie,
We are very sorry hear that your foster mother Carter has crossed the rainbow bridge. Too many of our canine friends seem to have passed lately and it's just too sad.
How nice that you were able to see her one last time. 6 years is so young. Very sad.

That is so sweet & sad, I'm typing through tears.
Extra pats & pets to you.
Blue
x

We're so very sorry to hear about your friend, Carter. We're so glad you got to say good-bye to her! She was so young! :-(

Muzzer read this on the terrier line, but we are sad all over again. We know that she will be watching you furever, so you better start behaving yourselves!

pee ess it must be wonderful to have a guardian angel doggie, you will love it later when you miss her less

dear a+a, it's sad to read the story again... i know you must've felt terrible that day when you went to see her for the last time. but i believe all of us, humans and dogs and everyone else, we will come together again one day. please take care of yourselves. hugs.

and the Canine Kids said,
We are so sad to hear about the loss of your foster mom, Carter. We send you hugs to try to ease the pain of your loss.

Carter's spirit will live on within Agatha and Archie.
Sometimes it can be very hard to witness the transformation from dog to guiding spirit. Dogs are magical, anyway, aren't they?
We are very sorry for your great loss.

we are very very sorry for your loss. It was nice that you were able to say goodbye.

Agatha and Archie
I can understand how sad you are for your foster mom Carter. Its very sad to hear about it. She was so young!
It was nice of you two to go and say good bye to her. Yes, we know better when something is going to happen.
Carter, her family and you all are in our thoughts.
Have a good night
Lorenza

Hi Agatha and Archie
It suwe is a cwummy week , I hope it gets bettew soon...Santa Paws bettew come thwough with whirled peas ow something
smoochie kisses
ASta

oh Agatha and Archie, I am so sorry to read about poor Carter. Tell PL2 that was a wonderful post, in tribute to her.

Dogs are the best in the whole world!

I'm so very sorry to hear about the loss of Carter. I will keep, her, her family and all of you in my thoughts.

Us animals do understand. When Flakes was poorly and subsequently died earlier this month I understood.

Agatha and Archie, I'm so sorry about your good friend Carter. I'm glad you knew it was time to say good-bye and that you got to do that.

We are real sorry about losing your foster mom. Hugs and kisses to you both. She'll be waiting at the rainbow bridge, though!

We are sorry as can be to hear of your dear Miss Carter. What a very special friend she was, but so young to have to go. Your PL2 did such a great job in her tribute that now our Servant's eyes have gone all leaky. We'll fix her up, don't worry.

We read this on the wirefoxterrier list, and wrote to you then to tell you how sad we were to hear that your dear friend was passing over the Bridge. Now that she is there, we hope you can think about her the way she was when you were first together. You're such a credit to her teachings, she'll be looking down and smiling a proud doggie smile!!!

Such sad news, and a truly touching description of you saying your goodbyes. I hope that you all find comfort this Christmas.